There was a considerable lace industry at Dieppe during the eighteenth century, and several varieties were produced, the best known being "point de Dieppe", which had some resemblance to Valenciennes, but was simpler, required fewer bobbins, and was made in a long strip which was wound round the pillow as the work progressed.

Dentelle a la Vierge, much used for the wonderful caps of the Norman peasant women, and Ave Maria lace. The distinctive features of dentelle a la Vierge are its small stiff patterns outlined with a flat thread and its reseau known as " cinq trous ". Ave Maria lace is very narrow, has a plaited Valenciennes ground, a straight edge and very insignificant patterns. It continued to be made up to the middle of the nine­teenth century.

The earliest laces made at Bayeux were of a very light description and included mignonette, a narrow lace with a clear ground, much in request for caps and head-dresses, and point de Marli, a lace with a fine ground, generally powdered with square dots, and a straight edge finished with loops. Sometimes the net was additionally ornamented with sprigs worked with the needle. These laces were much in fashion between 1765 and 1785 and were produced in great quantities not only in Bayeux but in other towns in the neigh­bourhood. Late in the eighteenth century Blonde was the chief lace made, and soon after the whole industry almost died,  but recovered itself in 1827, when heavy silk laces began to be made for the Spanish market.

In comparatively recent times, thread-laces in the style of Mechlin have been the principal manu­facture of Bayeux together with a heavy needle-point lace with brides, called point Colbert in honour of the famous minister. 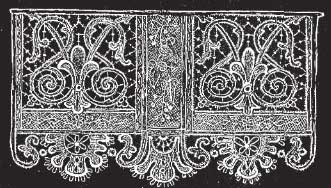