Blonde is another silk lace produced in Lille, Arras, Caen and Chantilly and the districts round them. It was first made about 1745, when unbleached China silk was used for it (hence its name), but pure white and black silks replaced that of a creamy tint before long, although the old name was still adhered to. Blonde has some points in common with Chantilly lace, but is easily distinguishable from the last named by its Lille reseau of untwisted silk, finer than that used for the toile. At first the patterns of Blonde were very light in style, but during the Napoleonic era they underwent a change and became bold and rather heavy. This departure was in all probability the result of the increasing export of black Blonde   to    Spain,   where   it was   in  demand   for mantillas.   The later designs are markedly Spanish in style. 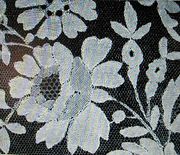