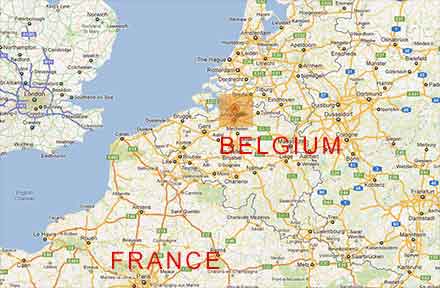 Antwerp, though an old lace-making centre , is remarkable for only one type of peasant lace, the " potten kant" so called from the representation of a pot of flowers with which it is almost always decorated. The motif is considered to be a survival from its earlier design, including the figure of the Virgin and the Annunciation, though it does not appear that any such composition has been met . The motif of a vase of flowers, however, is a common one among Flemish and Belgian laces ; and the flowers are not restricted to the Annunciation lilies, roses, pinks, sunflowers, and other flowers being met with.

Potten-kant is made on the pillow in one piece, and the ground is usually of the six-pointed star mesh, although occasionally other grounds, generally of an open, rather coarse type, replace the fond chant. The pattern is outlined with a thick, flat, shiny thread, the toile is thin and loose, and in some of the better and finer lace the spaces in the pattern are filled with a jours which resemble the snowflake ground of fausse Valenciennes worked on a coarser scale. Even in its finest quality, however, potten-kant was a stout and reliable rather than a dainty lace. It was made extensively in the Beguin ages, and was much used for trimming the large caps worn by the wcmen of Antwerp and its vicinity to whom, no doubt, its strength and durability appealed.

The ground varies from a coarse fond-chant ,a six-pointed star reseau, or, as it is better described, a diamond crossed by two horizontal threads?to various large meshed coarse and fancy grounds. The laces are usually straight-edged. The pot, or vase, or basket is not always part of the design ; a stiff group of flowers, throwing out branches to right and left, is almost invariable. Sometimes pendant festoons or garlands, or bunches of flowers are met with.f The cordonnet of strong untwisted thread often appears too coarse for the toile, and outlines it with short loops. Antwerp lace appears in a portrait of Anna Goos (1627 to 1691) in the Plantin Museum at Antwerp. The date of the portrait is between 1665-70, and the lace, which is straight-edged, has a thin scroll pattern upon a reseau ground. 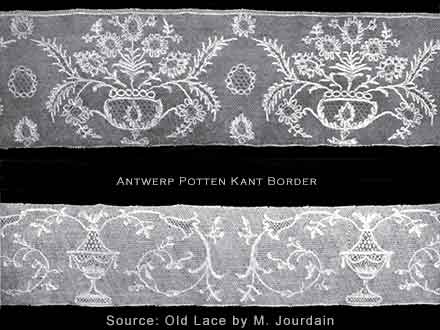