Terminology : 18th century printed cotton were named Calico ( from Calcuta in India) or Chintz  ( from the Hindi name cint derived from the Sanskrit word citra meaning spotted or variegated) or Indiennes( French name meaning “from India”). Chintz is a word that has a special meaning in England where it designates a printed cotton which is finished with a stiff glaze by a process of calendering. Here it is used interchangeably with cretonne.

2000 BC: first Indian cotton painted fabrics. Archeological research at Mohenjo-Daro shows that the technology of mordant dyeing existed on the Indian subcontinent 2000 BC.

Before 1000 AD: India and China trade fabrics
Around 1300 AD: Chou Ta-kuan, the Chinese observer of life at the Khmer capital of Angkor wrote that "preference was given to the Indian weaving for its skill and delicacy."
1550 AD: Indian printed cotton fabrics were sold to Japan by Portugeses.
1599 AD: The « London East India Company was granted an English Royal Charter by Elizabeth I on 31 December 1600. The company main trade was cotton, silk, indigo dye, tea, opium. 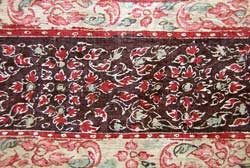 The first Indian printed fabrics that arrived in Europe were considered luxury goods. they were an immediate success, such a sucess that European manufacturers protested against that unfair competition. 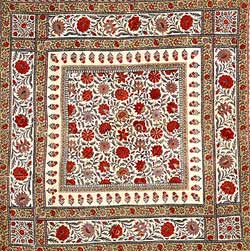 Textile lovers cannot miss that exceptional textile museum that has an unique collection of 6 millions designs.

Fabrics were printed with carved block of teak wood. 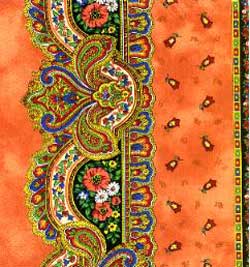 The brightness of their colors comes from the used of Indian natural dyes: red from garance, blue from indigo, yellow from gaude.

On the Coromondeol coast of India various mordant dyeing techniques were used to produce kalamkaris. Beeswax , mud or clay (depending on the area) were used as a resist method. ( Mattiebelle Gittinger, Master Dyers to the World: Technique and Trade in Early Indian Dyed Cotton Textiles)